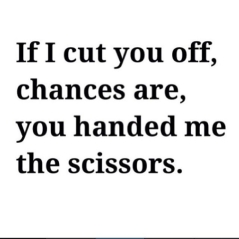 I realize my posts have been few and far between.  This new job has me jumping through hoops…and I love every second of it.  With all these fires (both professional and personal) I’ve been trying to contain these days, I’ve learned some very valuable lessons in not only patience but in the art of picking one’s battles.  Normally, I’m not one to let shit slide from anyone…Holding people accountable is my forté…but sometimes taking a step back and processing the raw emotion is best for everyone.  Now, the tricky part is to choose when to unleash, and when to STFU.  Who will be the unlucky motherfucker who gets my wrath, and who gets off easy and what is the selection process?

I want to say this is a simple answer but there are a lot of variables that ride on who I put effort into when it comes pointing out people’s fuck-ups.  Typically, if you hold little to no weight in my life, and you act a fool, I don’t waste my time in correcting/pointing out assholish behaviours.  Undoubtedly I let more idiots slide than I should…but at the end of the day, I don’t feel my emotional efforts should be wasted on people who are adult enough to know better but who don’t have the capacity to act like decent human beings.

Case in point:  I live by my own golden rule that effort is the best indicator of interest.  And, I’ve said it about a thousand times…If a girl or a guy is not putting in effort to see you/date you, then s/he is clearly not that into you.  Thus, if there is no reciprocated effort into a potential dating scenario, my philosophy is to just cut it off and move on…No sense in pursuing someone who clearly doesn’t like you enough to pursue back.  But that process, for me (and I suspect with others), doesn’t come without a small personal struggle.  It sucks when someone you’re interested in doesn’t show interest back.  No one likes that. However, smart people know when to cut their losses.  Smarter people know how to be good losers (and I use ‘losers’ as a game metaphor…not a life metaphor).  The sting is there, but it’s not worth the emotional effort to express that disappointment.  Best to internally sort it out and move on.   In scenarios like this, I choose the chunk-the-deuce path because, though I FEEL things, I don’t feel them enough to think it necessary to waste any more effort on someone who wouldn’t jump a puddle for me.  It’s not my place to point out what a colossal disappointment they turned out to be, or how big of a mistake I think they made by not being up-front and honest with their intentions.  Karma will sort that out.  Not my circus.  Not my monkeys.

I carry this same philosophy in all aspects of my life.  Energy is best spent on those who bring value to your life.  The people who want to be around you and who put the effort into picking up the phone to check on you or who make dinner plans with you for no reason are the people worth your emotional effort.  Those are the people you can expend energy into expressing your feelings – be it telling them to go fuck themselves or to have a nice day.  Whichever.  THOSE are your monkeys.  And those are the people who, at the end of the day, add value to your life and are worthy of your wrath, love, and ultimately devotion. Some random guy or girl who shows zero intention of trying to be a part of that princess fairytale doesn’t deserve the courtesy of an ass-chewing.

So zip it up, ladybug.  Don’t waste your emotional and physical time on people who have shown zero interest in putting effort into being in your life.  Save that emotionally-charged-f-bomb-filled speech you had practiced in your head for people you care about and who care for you in return…those are the peeps worth expressing your emotions for.  Cuz at least you know the friendship/relationship will continue after you act a fool.  Happy fighting!

Join 87 other followers
Follow My Sarcastic Life on WordPress.com